Yes…you read that right….the starfish in this photo are made out of PLAY DOUGH…..
HOME MADE play dough that cost virtually pennies to make!

It all started a couple of weeks ago with my attempt to create a “nautical themed” mantel!
I asked Mr. S if he had any rope….well as luck would have it….he had some in the truck and was just about to throw it out….

So he “threw” it my way!  I had the idea to use it to create  a wreath….
Which I did…by wrapping and making some knots as I went around…. 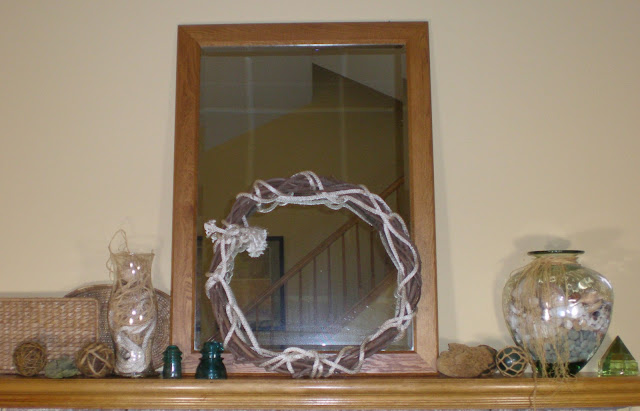 I stuck the wreath in front of the mirror…added some other nautical themed items….AND….
I really didn’t like it….
Boring…Bland…..but I had other stuff to do….and it wasn’t  AWFUL….just not great! 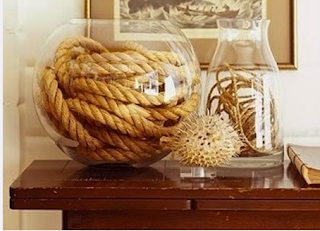 this from DYI Projects 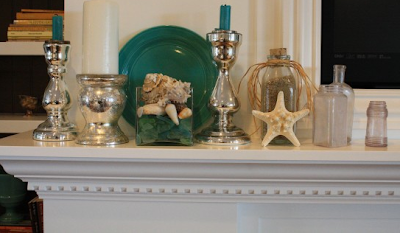 and from the Pleated Poppy 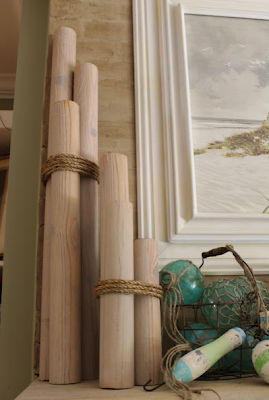 I saw this cute idea for faux nautical pilings from Miss KopyCat….cool…
but that would have meant going out to get some “swim noodles”…
And then…..eureka! 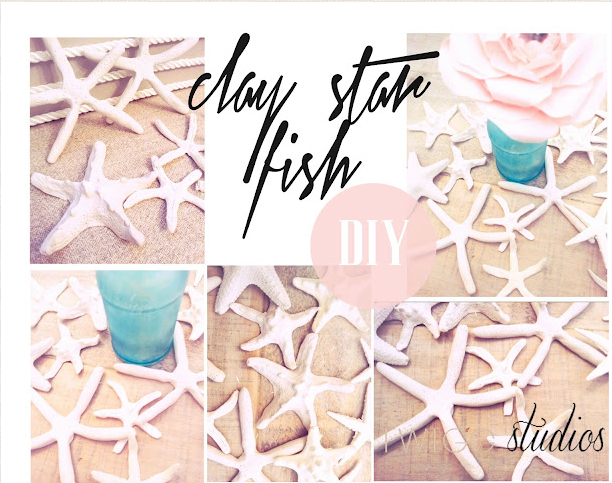 Aimee over at Twigg Studios posted this Clay Starfish Tutorial….
Her starfish are made out of “air drying clay” and look fantastic….so is her tutorial…
I am soooo jealous of a good tutorial….
Well I wanted to make some of these…but I didn’t want to go out and buy clay…
HMMMMM….but I have made a lot of play dough…..
and I remembered that when the kids didn’t get all the pieces picked up…. it would certainly “air dry” all over what ever surface they left it on!
SO I made some Play Dough using this recipe:

Put 1 cup of flour, 2 teaspoons of cream of tarter, and 1/3 cup of salt in a pan and mix together. Add 1 cup of water and 1 tablespoon of vegetable oil.
Turn your burner on medium/low and stir until the mixture “comes together”.  This usually takes only a couple of minutes.  Remove from pan and cool.  Knead to a smooth consistency once the dough is cool enough to handle.

Then I made my starfish…..
Like Aimee…I looked at lots of pictures to get ideas for shapes and textures…
But basically I just played around! 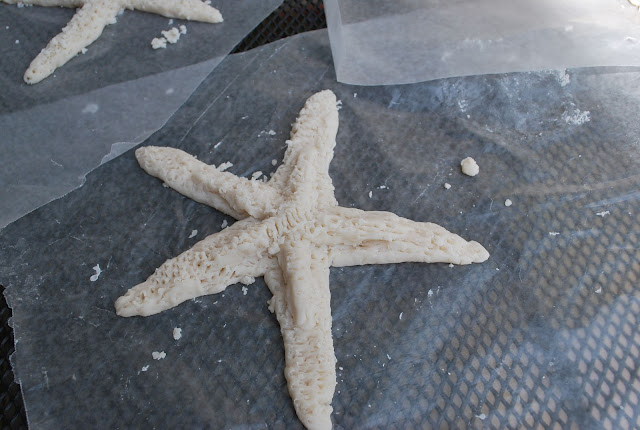 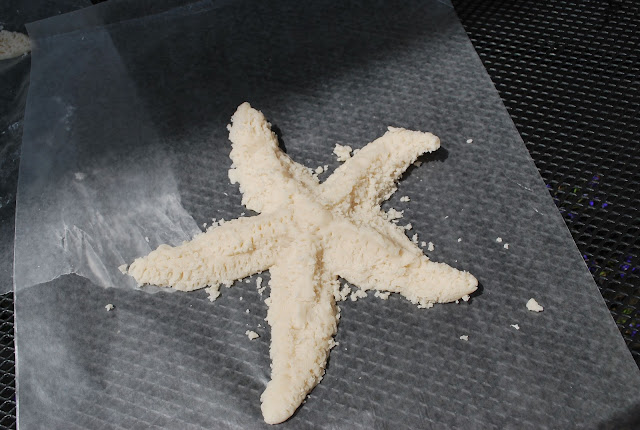 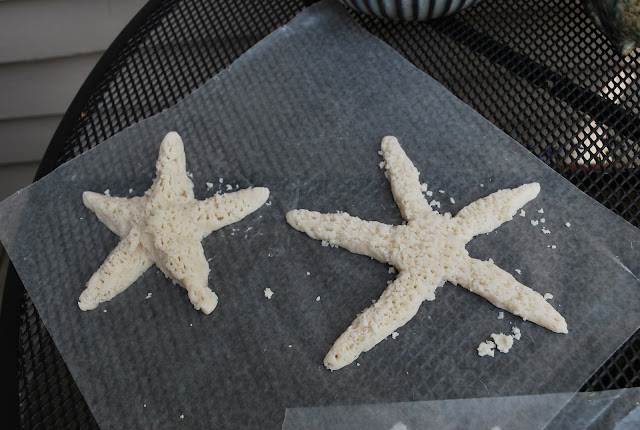 I used a fork to make textures….and just pinched and shaped them into reasonably “authentic looking” starfish shapes…

I put them out in the sun to dry….figuring they would dry quickly….
except the humidity the day I did this was about 98%….
and then I left them outside overnight!
BIG MISTAKE!….they were almost dripping with the dew….what was I thinking!!!????
So I popped them on a cookie sheet and baked them at 200 degrees for a couple of hours….
That got the drying process underway….and they completely dried in 2 more days! 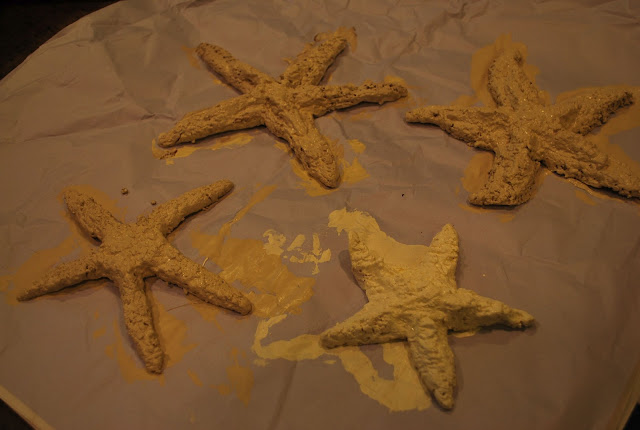 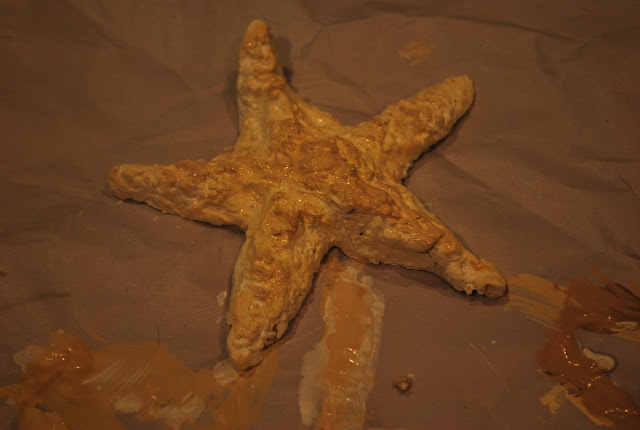 Then I just used craft paint to give them a finished look….forgive the AWFUL photos…at this point I really didn’t think the project was going to work and took the pictures with my phone in some pretty lousy light! 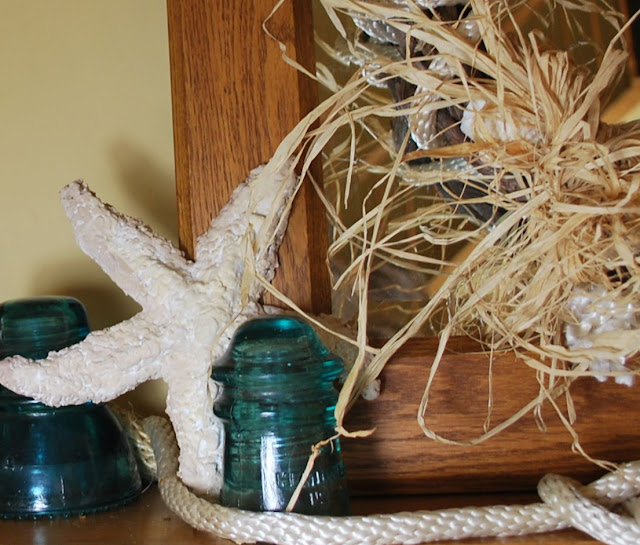 Now here are the “STARS” of my mantle tucked into place! 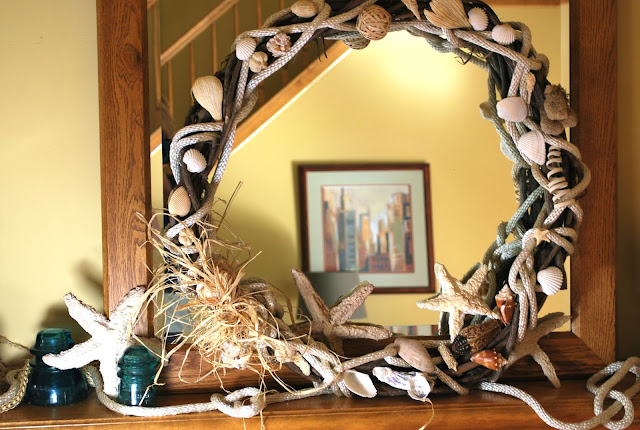 And while the finished mantle isn’t perfect…. 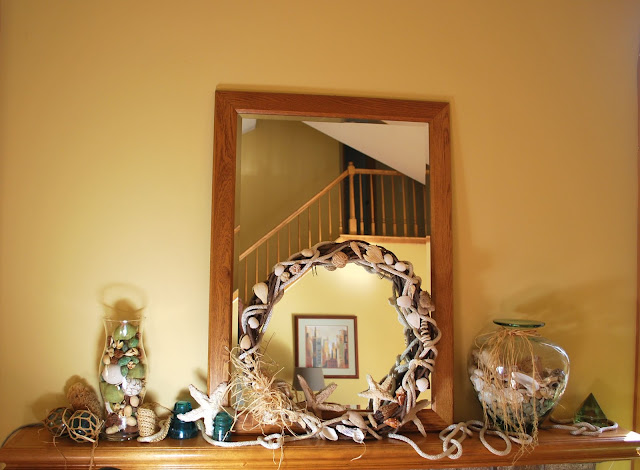 I think I can live with it….until I see someone else’s cute idea to copy!
So thanks to Aimee for the inspiration to make my own starfish!
I think making these Play Dough versions would be a fun summer afternoon project for your kids….sure to cure the “I’m bored” blues…
Oh…I almost forgot….check out these cute silver painted starfish at Mom4Real
They are made from glass starfish from the dollar store! 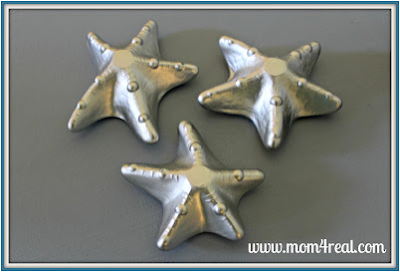 0 comments on “Faux Starfish Would You Believe Play Dough?”