The Sweetwater Daughter scored these 4 chairs and huge table on Craig’sList….all for $250! 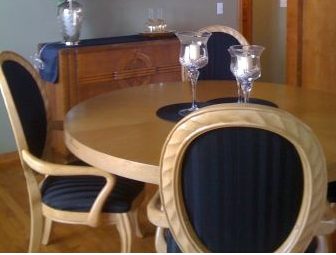 She bought them to use as the “guest chairs” in her new law office….
They sat in the Sweetwater garage all summer waiting for a facelift!

Maybe you remember reading my post about A New Way to Fabric Shop!

After lots and lots of discussion….this is the gorgeous fabric they chose! 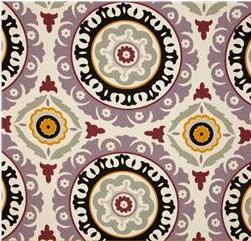 NOT SO MUCH!!!!
We probably spent about 2 hours on EACH chair….but truly it was worth it!
Lots of Mother/Daughter bonding!!!

Whenever I start an upholstery project, it seems to take me a long time to figure out exactly how to proceed!
In this case…..one night the Sweetwater Daughter and I spent one whole evening….(and one whole bottle of wine) figuring out the construction of the chairs….AND…how to work with the design/pattern of the fabric!!!

The Seats came off easily with the loosening of a few screws….

They would be easy to just wrap and staple….

Not so much.…but more about that later! 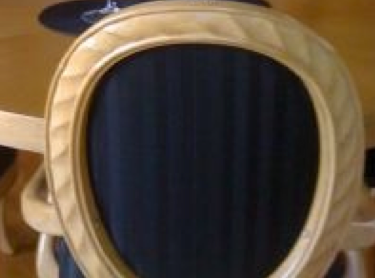 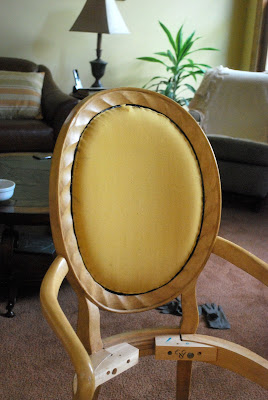 In the case of these chairs it was a bit complicated because of the chair backs….

We couldn’t easily figure out how the chairs were actually put together…..and until we figured that out…we couldn’t take them apart…

We even got Mr. S. involved and he couldn’t solve the puzzle either….

In true “Sweetwater Style” we started by ripping off the welting that was glued in place!
Then we ripped off the fabric….and this is what we found!
We decided to treat the front and back separately!
First the back!  We wanted the large circle to be centered…..easier said than done!!!
After some trial and error we figured out how the pattern worked so that we could make all the chairs look alike! 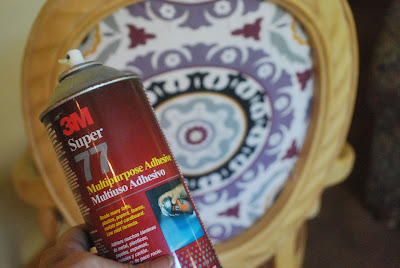 The circle was cut with a 1/2 inch allowance that was pressed under.
Then we sprayed adhesive on the wrong side of the fabric and smoothed it right over the existing fabric. 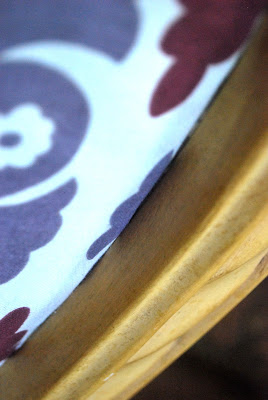 Then the edge was simply pushed into the frame. 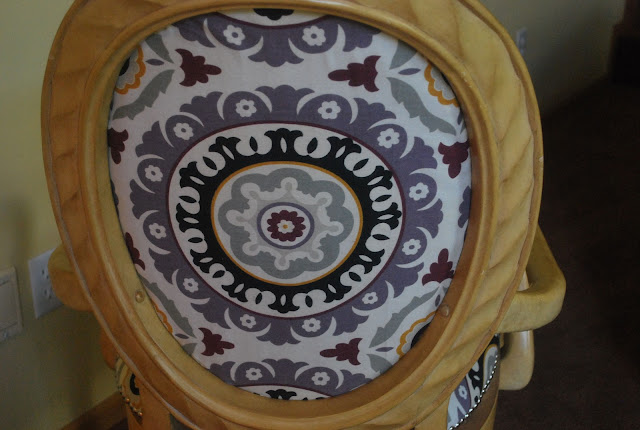 The technique for the front of the seat back was a little “trickier”!

Yikes….look at all the staples that were used….there was just NO way we could remove them.
So…if all those staples stayed there….we wouldn’t be able to use the staple gun without hitting them….
EUREKA!!!  We remembered how I embellished this little Faux Leather Side Table with nailhead trim!!!  This stuff is amazing!

So the project went on hold until the trim arrived in the mail! In the meantime….I used the trusty compressor and stapler to finish covering the chair seats! 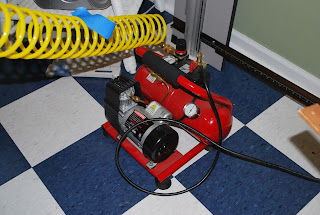 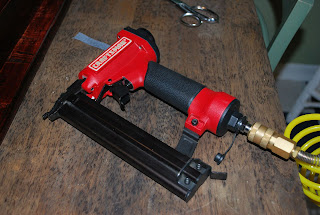 What should have been a 10 minute job for each chair turned into a much longer “ordeal”!
Why???
…..the darn pattern had to be matched not just so the circle was in the center….but that the whole thing was straight….
AND
Each chair needed to look the same!!!!
Needless to say….I am awfully glad to have a “mighty fine” staple puller!!! 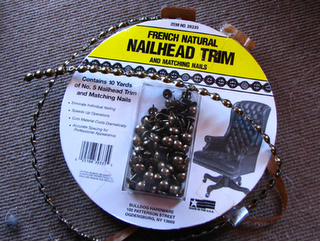 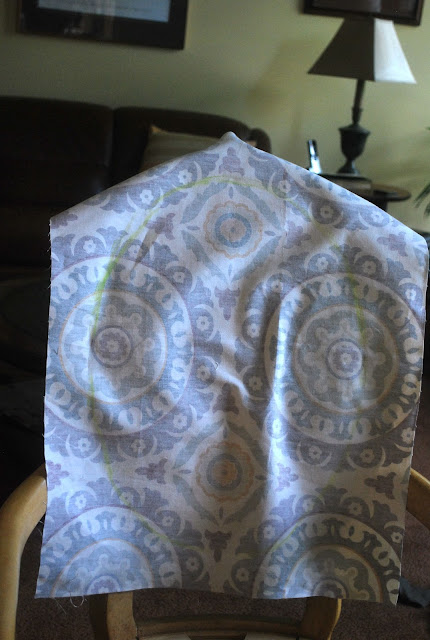 When we tried that…..it kinda made you dizzy!!!

Note that the circles are on the sides…

We smoothed the fabric in place and pinned it so that it was straight and then used chalk to go around on the edge…..

I cut it to size with enough extra to fold under. 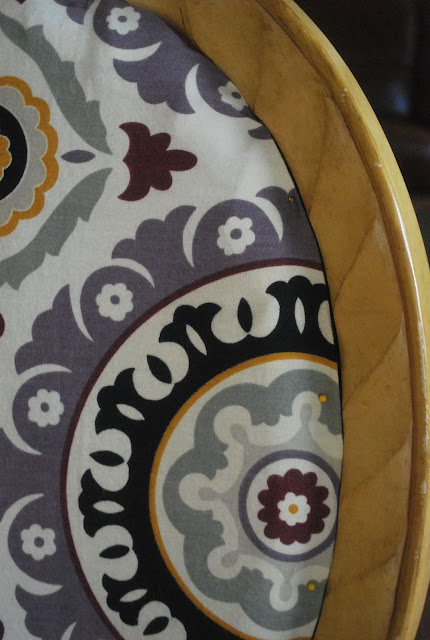 We used pins to hold the fabric in place and to keep it straight….

We then did the nailhead trim on the seat cushion

and around the front edge of the seat back. It was easy to nail the tacks in and avoid all those staples!!  The nails hold the fabric nice and tight!

NO pictures while this was going on….all 4 of our hands were occupied!!! 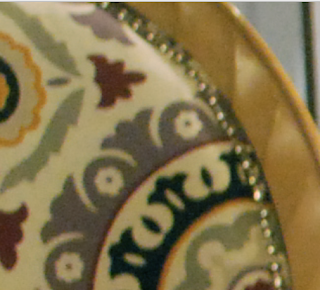 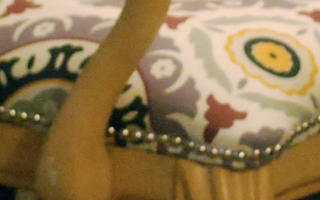 But this is a close up of the nailhead detail!

There were a “few” pitfalls….a couple of redos……but FINALLY the chairs were DONE! 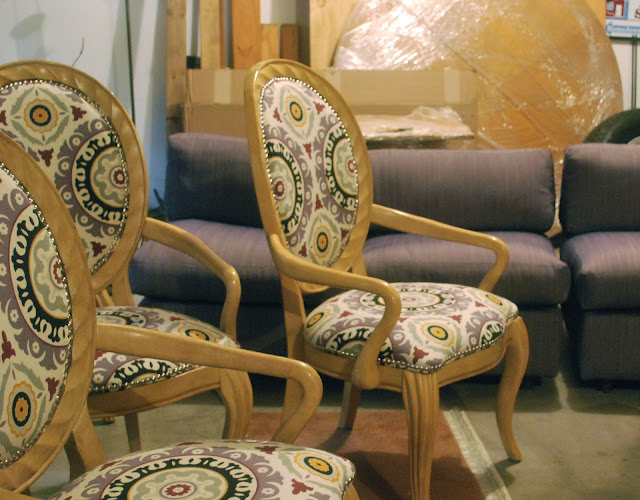 They stayed in the garage until the exciting day when they could move into the new office!!! 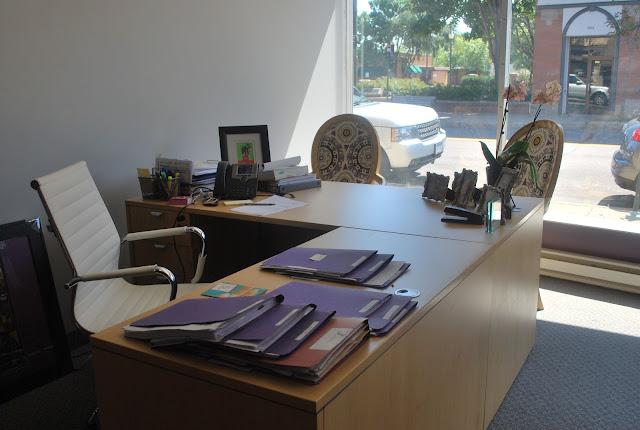 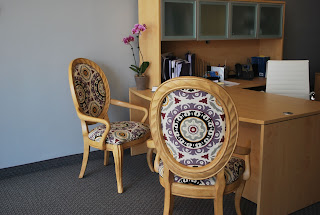 Awsome….!!!
We think our time was WELL Spent!
Isn’t the Sweetwater Daughter’s Office inviting?
If you can’t tell…. the Sweetwater MOM is pretty proud of her girl!
Someday soon I will post about recovering the sectional pieces for the office seating area! 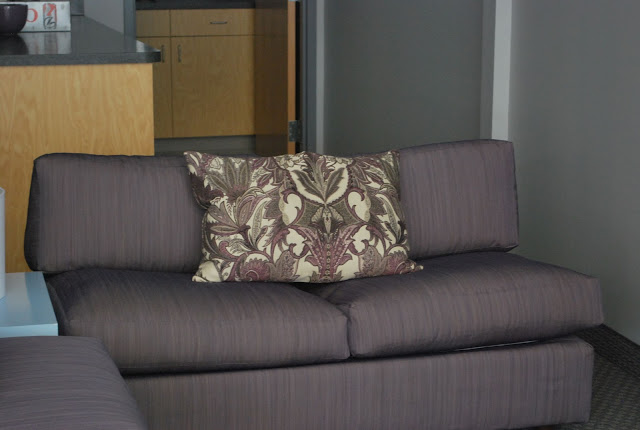 In the meantime…Have a GREAT Day!

0 comments on “Occasional Chair Make Over”