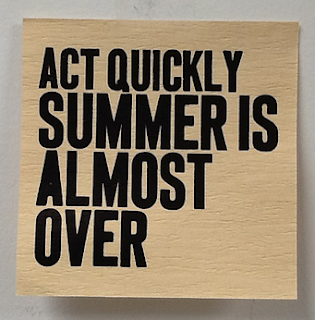 Oh my…..if that isn’t the mantra that is running through my mind this week.

I can’t believe that in less than ONE week from today….

I will be back to school!

I have lots of projects that are still not done….
They will get done….but more slowly once I need to fit them in before and after school!

I thought I would post a few “little things” that  ARE done!
None of them warrant a stand alone post…
So it is another edition of:

I had an old lamp from Goodwill that has served us well….but I was getting tired of it!
I have always loved the “rope lamps” that they have at Crate and Barrel and Ballards!

I took some more of the rope from Mr. S’s work bench…
Got out the Glue Gun….
In 10 minutes….an updated lamp! 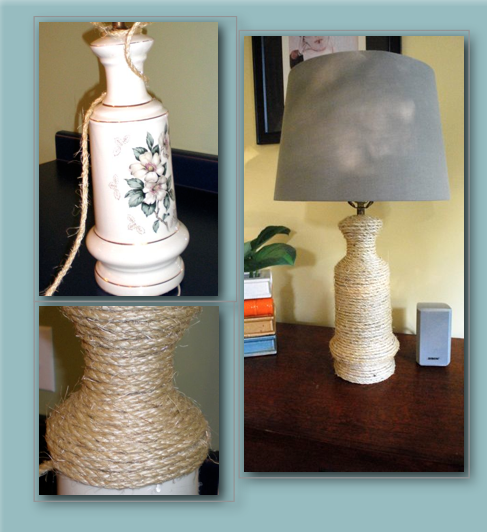 I think Mr. S is getting tired of buying new rope…maybe I will have to buy my own for my stash!

The basil plant I bought in May is a real gem…
I keep rooting new cuttings and now have more basil than I can use…
Well….not really…if I just get organized and make some pesto!
I did take some of the cuttings and plant these little pots!
I made little burlap bags….
I will take them to school and put them on the tables for our “Back To School” meeting!
Maybe I will print out some pictures of vintage School Primers….
It is a pun on BASAL READERS…Get IT?
Non-teachers might not know what a Basal Reader is…and of course….I will tell you!

Basal readers have been in use in the United States since the mid-1860s, beginning with a series called the McGuffey Readers. This was the first reader published with the idea of having one text for each grade leve. Since then, teaching methodologies in school basals have shifted regularly. The Scott Foresman Company published what is perhaps the most famous basal series, whose stories starred two children named Dick and Jane. Dick and Jane books emphasized memorizing words on sight, a method which came to be known as “look and say.” (From Wikipedia) 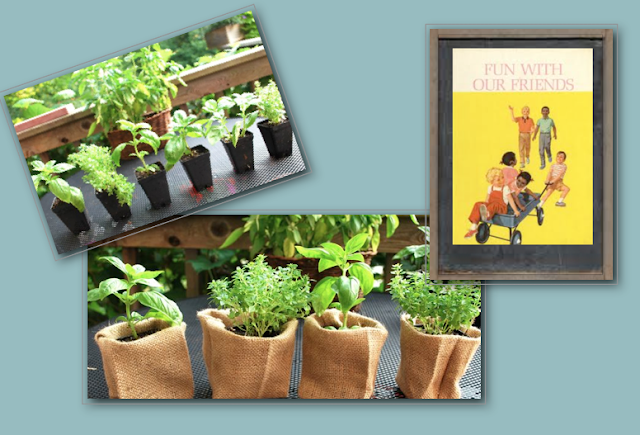 The Dahlias are blooming at Sweetwater….and they look amazing!
I love to cut them for low arrangements like this.
I took my own advice and am conditioning the stems when I cut them.
I dip the stem in boiling water….then immerse the whole flower in cold water for 5 minutes.
The blooms are lasting 3-4 days….pretty good….and there are always more when they wilt! 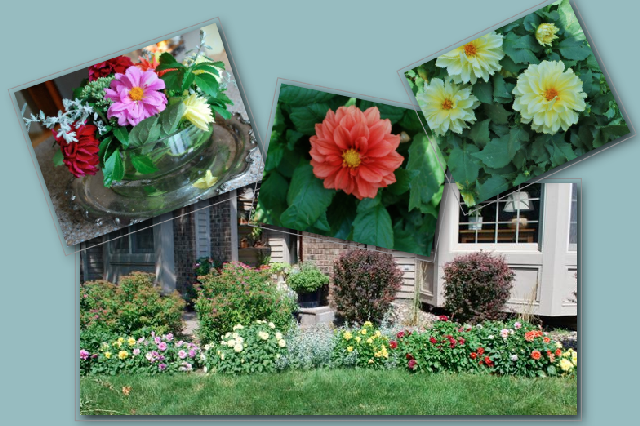 I found a wonderful watercolor still life at GoodWill the other day.  A quick matting project and now it hangs in the kitchen eating area.  I love the colors don’t you? 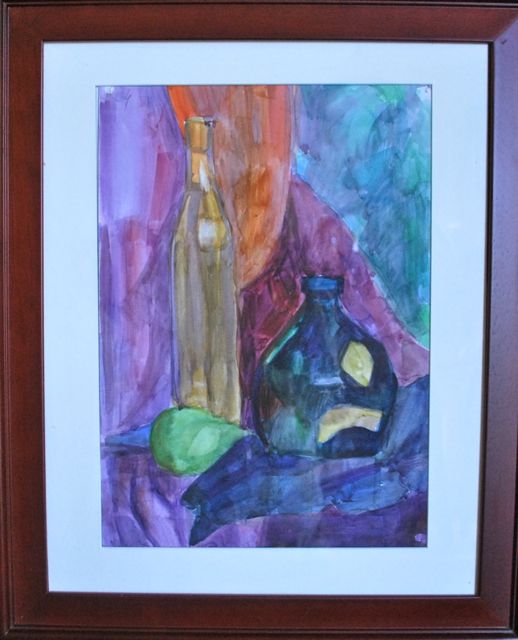 Fertilizing and Deadheading have paid off for the Planters on the Deck….and the front steps! 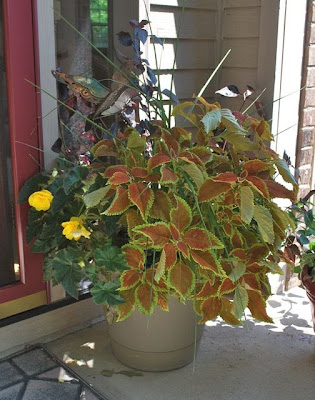 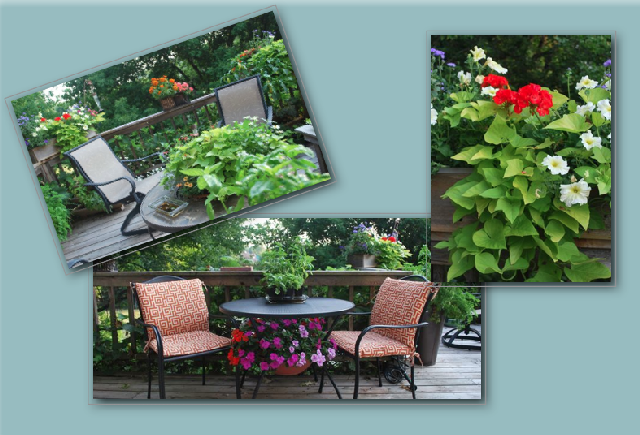 Mr. S and I did a “mini-staycation a couple of weeks ago….I took this great photo of a building on the riverfront.
I had it enlarged…..got out my trusty mat cutter….here is the result!!!  Now I just need to figure out where to put it! 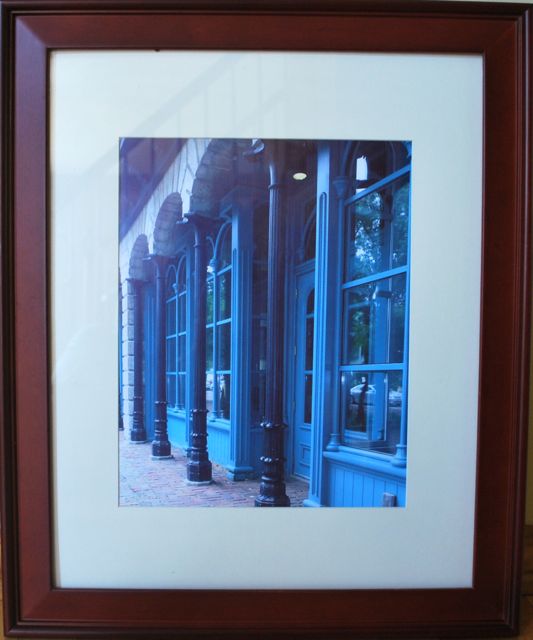 I am feeling pretty proud of my photography on this one!!!

Here is a happy accident….I trimmed some of the Sweet Potato Vine that was getting “crazy” big.  I stuck the trimming in a vase of water as a filler for a flower arrangement…
Low and behold….it sprouted roots!
I planted in some dirt….and now I have more plants from one.  My brother the landscaper, says that is how nurseries sell Sweet Potato Vine….I would have thought they sprouted them from the actual Sweet Potato! (That is what I am gonna do next season!) 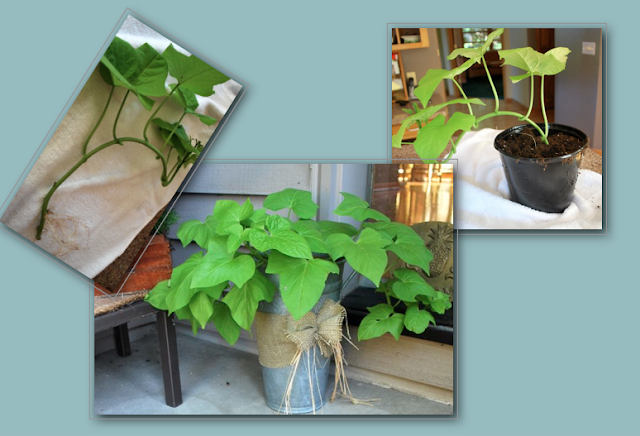 So there you have it…..Seven Pretty Simple Sweet Things from Sweetwater!

I wonder what else I can do in this last short week?

Have a Great Day!

4 comments on “7 Sweet Things at Sweetwater!”