Why is it that once the middle of August hits….going out in the garden to tend it isn’t QUITE as much fun as it was in MAY? 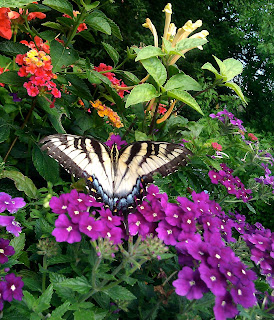 One of the challenges at Sweetwater is the fact that a lot of the garden is on a slope…
That means that the taller flowers are always falling down the slope!

I thought I would share the nifty copper plant stakes that Mr. S. has “invented” for our garden!
Well…actually…he invented them to hold up some netting to try to keep the deer out….but THAT was a complete failure! In fact…as I was writing this post…I had to go outside and shoo away the Doe and Fawn having breakfast in the Sweetwater Garden…oh well!

Anyway…after he made all of these….we repurposed them as plant stakes.

I would say they are pretty ingenious!  (but what would you expect from Mr. S?)
YOU NEED:
1/2 inch copper pipe
A copper Tee joint
and….somebody who knows how to solder!
that could be you but in my case it is Mr. S.
He Loves to use that little propane torch!
Here is a link to a “How to Solder Copper Pipe” 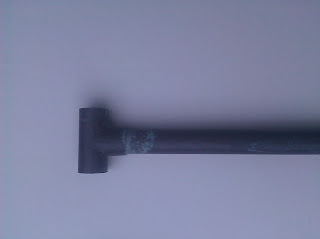 You can cut the pipe any length you want or need.

Mr. S. put the Tee joint on the top of the pipe for safety reasons….so that the open sharp end of the pipe would be covered!

Then we discovered that the Tee makes it easier to push the pipe into the ground…..
AND
even better….it keeps the string or raffia you are using to tie onto the plants from sliding down the stake. 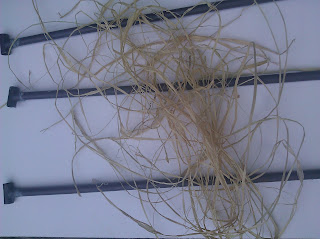 When I posted about this a couple years ago….I got a lot of comments about how expensive copper is!!!

I would argue that this is one of those times when “expensive” is “Thrifty”!

I did some consulting with Mr. S. and he reminded me that copper is super expensive right now…..and Sweetwater Style is supposed to be about being thrifty!

How many of the plant stakes made from other stuff are still good for that long???

I asked Mr. S. if you could do the same thing with white PVC pipe….for about $1 a stake….but alas he says that “it would bend like a wet noodle and rot from the sun”….so I guess not!
Maybe one of you clever readers has a suggestion for a less expensive material!!!

I love the patina on copper as it ages.

The stake and the raffia actually enhance the look of the plant!
These stakes can do heavy duty work…..even supporting these big sunflowers!
I found this interesting article about staking perennial plants.
For us….we have a bunch of these….and we will have them a long time….unless some of those “copper scrap thieves” discover them!
Oh….and here is another good reason to learn to use the propane torch…. 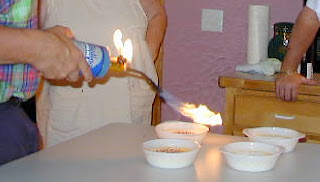 Here at Sweetwater Style…..
we don’t mess with those fancy little butane torches from Williams Sonoma
to burn the sugar on our creme brule!
I hope I have inspired you to get out in your garden even though these are the “dog days” of summer….or better yet…..make some Creme Brulee!
Have a great weekend…..

2 comments on “Plant Stakes for a Prettier Garden”