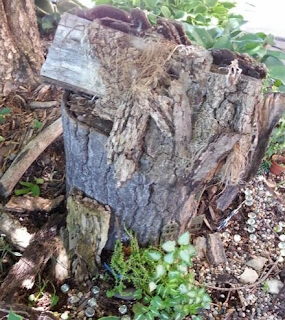 This Fairy House was a nice STARTER HOME for the Sweetwater Fairies…..

I was going to try to do some repairs…

I decided that maybe with all the damage it had turned into a TEAR DOWN and maybe it was time for the fairies to get a serious UPGRADE! 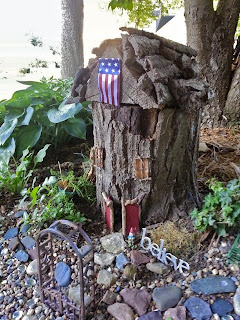 The old Fairy Garden got demolished and the Landscape was cleared!

I decided to get Mr. S involved !
He was making a trip to the hunting land to pick up wood for the fireplace!

I asked him to look for a really BIG stump!

I am pretty good with my power tools…..but I am not so good with the chain saw!
So Mr. S helped out by fashioning a custom roof by cutting the pitched roof! (he was obsessing about the fact that the two sides are “uneven”…but I liked that look) 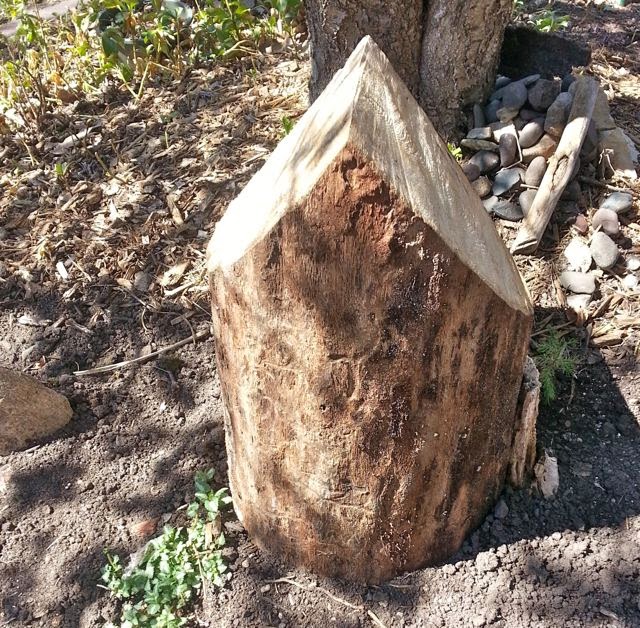 The next step was to create a Shake Style Roof using shim stock!

This size roof needed 6 packs of this…..the most expensive part of the project. 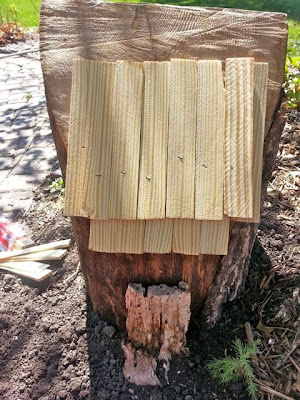 The shims are attached with staples.

The power stapler made the job pretty painless.  Two people make it easier to get the shingles straight!

In reality….that is a pretty small roofing crew! 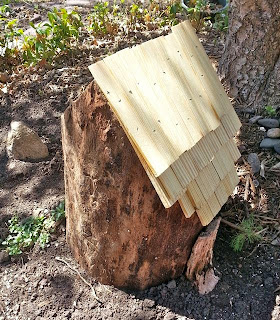 Once the first side was completely covered, the excess at the peak line was sawed off.

Then the other side….and that was trimmed.

The little piece of wood on the side of the house is just there for “architectural interest”!  It looks like a little side door to me!

I challenged myself not to purchase ANYTHING for the rest of the project.
I used a piece of trim molding that was left over from a past project!
The left over piece was the perfect dimension for the door…..which got a coat of red paint to match the door on our house! 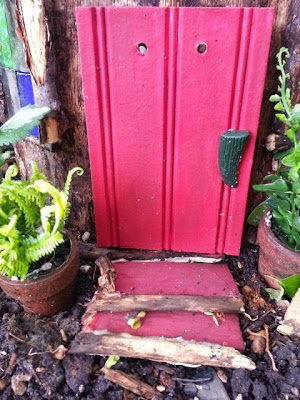 There were even holes drilled for nailing the door to the log.
I dug through my button collection and found the perfect rustic door handle!
The old red wooden door became the “front stoop”!
Since the new Fairy House is pretty upscale… it deserved some pretty upscale windows.
HMMMMM……I had some glass tile leftovers from a past project….perfect for Stained Glass Fairy House Windows. 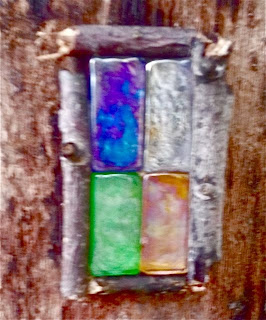 I forgot to take photos when I was doing the window construction…..but all I did was glue the tiles to a cardboard base using waterproof adhesive.  I added twigs for the window frames and glued them on with the waterproof adhesive.
(a little nail under the bottom of each window helped support the windows while the glue was setting up!)
I ran out of tiles….when I next visit the craft store….I will buy more for and make more windows!
I want to do some sort of Balcony with French Doors for the second story!
I am pretty excited about the way it turned out! 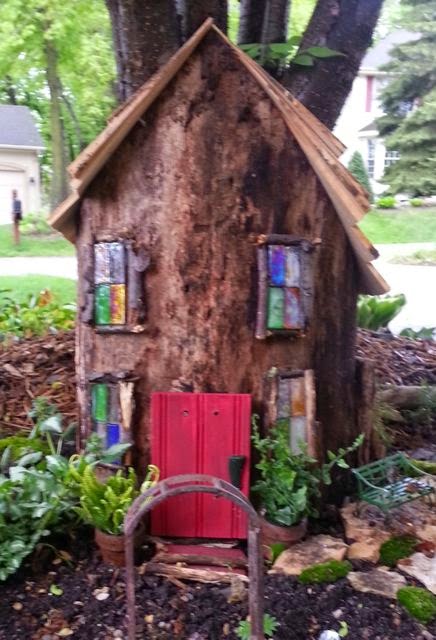 Come back tomorrow for the updated landscaping project for this Fairy Garden!
Today…I need to work on my MYSTERY THRIFT OFF project!
I am having fun with this and think I may have a chance to get some votes!
I need to keep this a secret until next weekend! Then you can see what I did with my popsicle sticks….and NO it isn’t Fairy Garden accessories….that would be WAY too obvious!
Have A Great Day!