Deadhead or Dead Head is a name given to fans of the American jam band, the Grateful Dead.[1][2][3][4][5] In the 1970s, a number of fans began travelling to see the band in as many shows or festival venues as they could. With large numbers of people thus attending strings of shows, a community developed. Deadheads developed their own idioms and slang. (from Wikipedia) 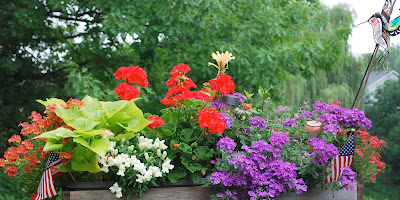 I mean I am a Dead Head when I garden! You can see it is worth the effort!

There are some basic techniques for pinching back annual and perennial flowers in your garden.  To quote my daughter “Mom, not everybody knows how to do this…you should write a post about it.”  So here goes:

What is deadheading?Deadheading just means picking off the dead flower heads-well duh!
It makes sense to do this just because dead flowers aren’t so great to look at. But the real reason to do it is to convince the plant to make some more flowers in the spot where you picked off the dead one!
Here are some links from gardeners with a bunch more expertise than I have:

In a nutshell, the basic technique is to pinch at a leaf juncture.  Don’t just pull off the flower at it’s base.  You need to send the message to the plant to send out new leaves…and eventually new flowers. 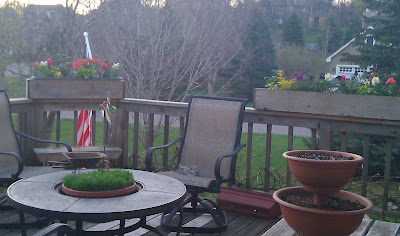 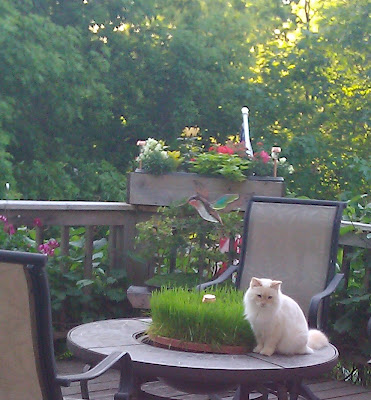 Here is what the planters looked like in May and in the beginning of June.
They were planted by me at Holasek Nursery at the beginning of May before they could be outdoors in Minnesota.  The lovely folks at the nursery let you buy and plant your own pots…then they KEEP them and water and fertilize until you can put them outside….great deal huh!

Note to my friends-see, Maxine the disappearing cat really does exist. 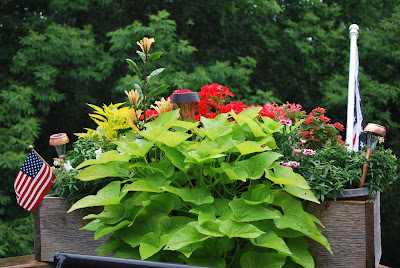 Now with lots of pinching back, watering, fertilizing and praying to the garden gods…..they look like this.

And yes…..I AM bragging!
But…only to prove the point that deadheading works!

I actually don’t wait until the flowers in my garden are dead. Because I like to have lots of little flower arrangements around the house, I do what I call “pro-active dead heading”. 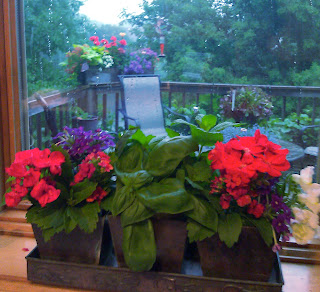 This arrangement over the kitchen sink was made from the flowers pinched back from the deck planters.

The daisies are in full bloom right now.
If I want that to last, I need to keep cutting them. 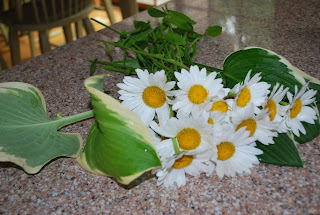 Here is how I hand tie bouquets.  I think the flowers last longer this way and the stems look nice in clear vases.

Cut the flowers at the leaf node with a pretty long stem.  You can usually see the new bud in the node when you cut.  I cut some Hosta leaves too. 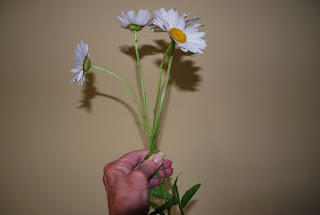 Start picking the stems up and cross them over each other with the flower heads even at the top. 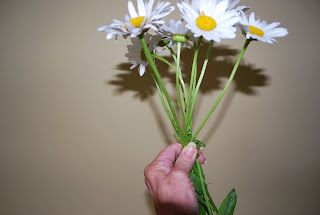 Keep doing this with all the stems.  You sort of have to move in a circle…crossing stems and making the flower heads go in a nice bunch.  Keep trying….you will get the feel of it. 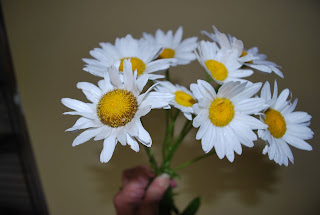 When they are all bunched together.  Arrange them and do a little more twisting so that the bottom stems almost form an X. 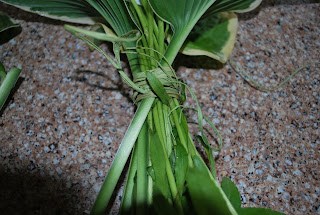 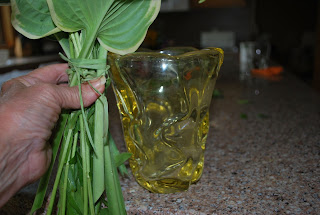 Tie raffia or ribbon around the stems a little way down.  Notice how the bottoms of the stems fan out.

Measure the stems against the vase you are using so you will know where to cut.

Cut off the stems with a sharp knife and be sure to remove any leaves that will be immersed in the water. 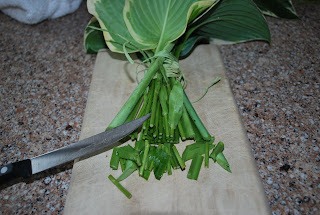 Put your bouquet in the water and ENJOY! 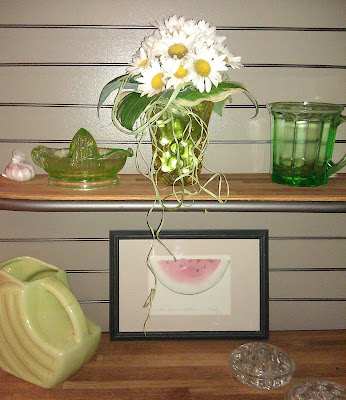 If you still aren’t sure about how to pinch back a specific flower, it is easy to do an internet search asking about deadheading your particular flower.  The links at the top of the post have pictures to help you as well.

If it ever stops raining, I am heading out to do some dead heading…how about you?