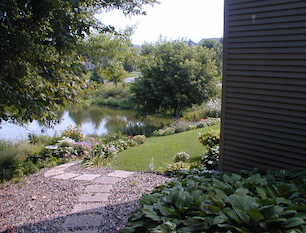 The gardens have changed through the years…. 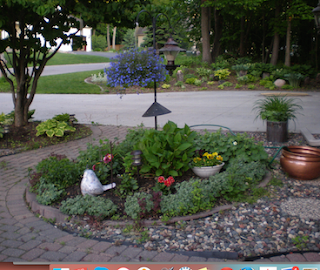 but the basic river rock around the foundation of the house has stayed the same.

These photos are about 15 years old.
The river rock is still pretty “clean”. 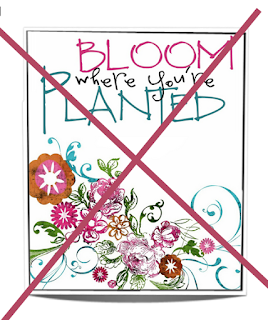 Over the years, the rocks have “collected” lots of composted matter that is just perfect for “growing stuff”….and not necessarily “Stuff” that we want.

It was TIME to do something!
The more Mr. S and I talked…..the less appealing it was to think about dealing with the rocks ourselves.

We decided to (GASP) hire professional landscapers!
We knew that this would be a project that would cost some considerable dollars!
We were okay with that…..but we still wanted to stay within a budget.
Let me share some things that we did to save money and get more value from the time the PROS were working.
DO take the time to have a lengthy consultation with your landscaper.  We walked the whole yard and talked about the areas most in need of work.  “Tim the Landscaper” had some great ideas for saving money.

DO be very up front about your willingness to do some of the prep work ourselves.

DO be willing to utilize and move existing plants in the yard.

DO carefully review of the quote.  “Tim the Landscaper” included all of our dreams in a comprehensive list with prices.  This let us pick and choose what we wanted to tackle ourselves, what we wanted to pay for now, and what we would put off until next year.
I really think the time we took to really talk and communicate our wishes saved us money in the long run.  We also knew that the landscapers knew exactly what we wanted and were willing to pay for.

I am sorry to say that I DID NOT take photos of the week long process…..
but here are the results with how we incorporated the EXPERT PROS and our own “Sweat Equity”. 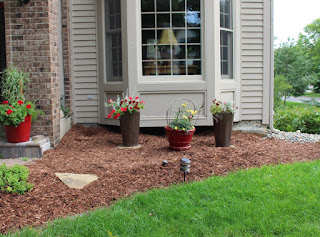 “We” (meaning Mr. S!)  Hooked the truck to the old overgrown Barberry bushes and pulled them out.

There were also some shrubs in the rocks behind the Peony bed on the side of the yard.  I was embarrassed by how “ratty” they looked….and now they are GONE!

We also tried to transplant my beautiful Dahlias from this area….ALAS…..not so successful.  I guess I shouldn’t complain when I see this lovely clean slate.

We aren’t sure what planting we want for under the window.  So for now, we just moved these tall planters and the rose bush in for temporary fill. 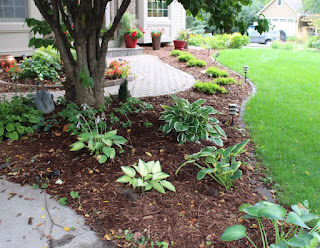 There was a “mess” of overgrown Hosta, Pachysandra and volunteer violets in this part of the front path.

All of this got pulled out by us ahead of time.

After the rocks were moved and the mulch put down we planted a much edited version of the garden.

DO let the pros do the hard stuff!  It was a sunny 90 degree day when the three strong young men did the backbreaking job of removing all of the rocks. Can you just imagine how long this would have taken US to do!
DO think of ways to save work for the landscapers.  We had them dump the old rocks in our woods on the side to save the cost of hauling them off-site. 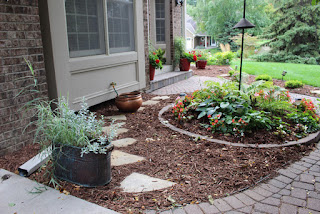 The round garden pavers had “sunk” through the years.  These were raised up for a nice sharp look.

The slate walk way is a real “gift” for me!  I don’t have to tip toe over rocks to get to the hose and water anymore.  I often garden in my barefeet…..so this might be one of my favorite upgrades! 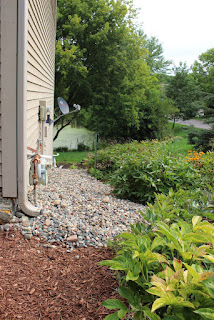 With the shabby shrubbery ( don’t you love that alliteration?) removed, the landscapers brought in larger river rock to go down the side of the house.

This was a suggestion from Tim the Landscaper.  If we had used mulch here, it would have washed down the slope.  The bigger rock was just dumped over the old stuff which also saved money.

Now for the back yard garden!
Yikes….this area was getting completely “out of control”!
I had been meaning to redo this for a couple of years and now was the time! Once again….we did the prep work of digging up all of the plants we wanted to save to put back or move to other gardens.

It was pretty messy under the deck for a few weeks.

Doing this ourselves was another money saver.
DO let the pros use their tools.
DO use “what you have”!
You probably don’t notice all the big rocks in the “before” garden.  Over the years they got lost under all the plants.  Using muscle and skill, they moved these rocks out to use in another place.  BIG money saver that would have been virtually impossible to DIY!
Once the rocks and plants were gone, the landscapers came in with round up to kill the weeds.
Then they added 5 inches black dirt and rototilled the whole thing!
You know you are a gardener when a big expanse of new black dirt is more exciting than new clothes! 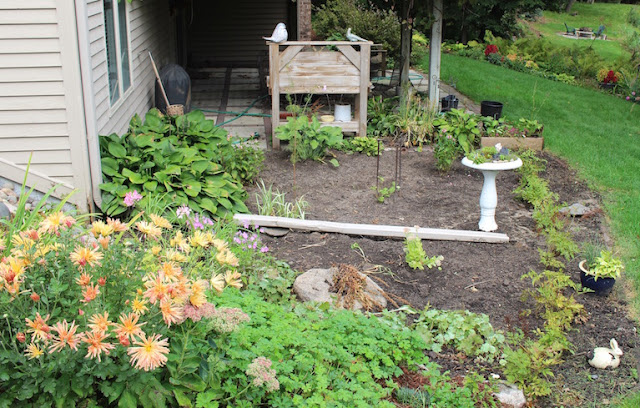 We DIYed the replanting of some of the things we took out.  Most of this garden will wait for next Spring to become a fresh new cutting garden.  YIPPEE! 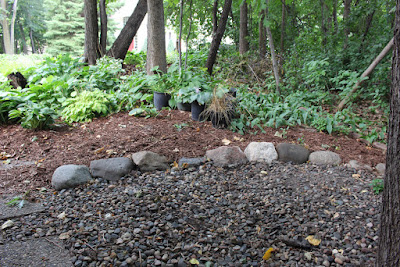 I walked through all the existing gardens to point out the many big rocks/boulders that were hiding among the plants.

The rocks will slow down water run off when it rains. 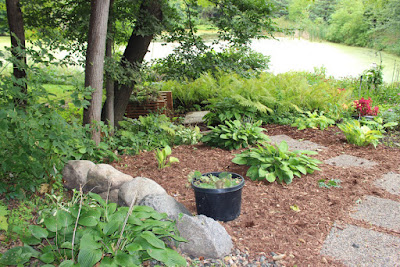 That way the mulch won’t wash down the slope.

We also used the existing square concrete pavers for the walkway. The landscapers used their muscle and expertise to lift and place them in a new path to the compost bin.

This just might be my favorite part of the whole project!

Now I can safely carry the big loads of composting material down a clean path instead of sliding down slippery river rock!

The placement of mulch throughout this area is a nice clean look for all the Hosta we have waiting to replant. 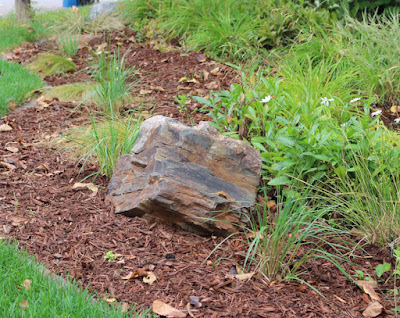 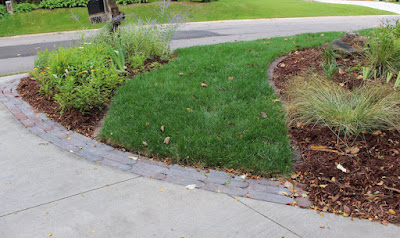 DO  listen to the expert when they have a good idea!

Tim the Landscaper drew up this plan for the side of our yard in the front.

This area is challenged by the intrusive roots from all the trees between our lot and the next door neighbors.

The suggestion was to minimize the amount of grass…..dig out and replace several inches of dirt with new black dirt and sod!

We thought that a narrow strip of lawn might look odd….but Tim was so right!

The front edge of this garden now has a planting of native prairie grasses that will thrive in the poor soil…..and…hide some of the messy planting until we can get in and re do it!

The edge of the driveway got three rows of pavers to make that end of the driveway easier for backing out!  Mr. S. is really happy about this element.  I think it just looks so nice and finished!

DO be patient.  If you are going to do some of the work yourselves, you will not see a perfect landscape when the trucks pull away!  It is going to take the rest of the season to pick away at “perfection”!

I can’t say too much about how wonderful the landscapers were.  They came on time….worked super hard when they were here….and did a super job!

Now….with the money we saved….maybe I should head to the nursery to buy some new plants!

Have A Wonderful Day